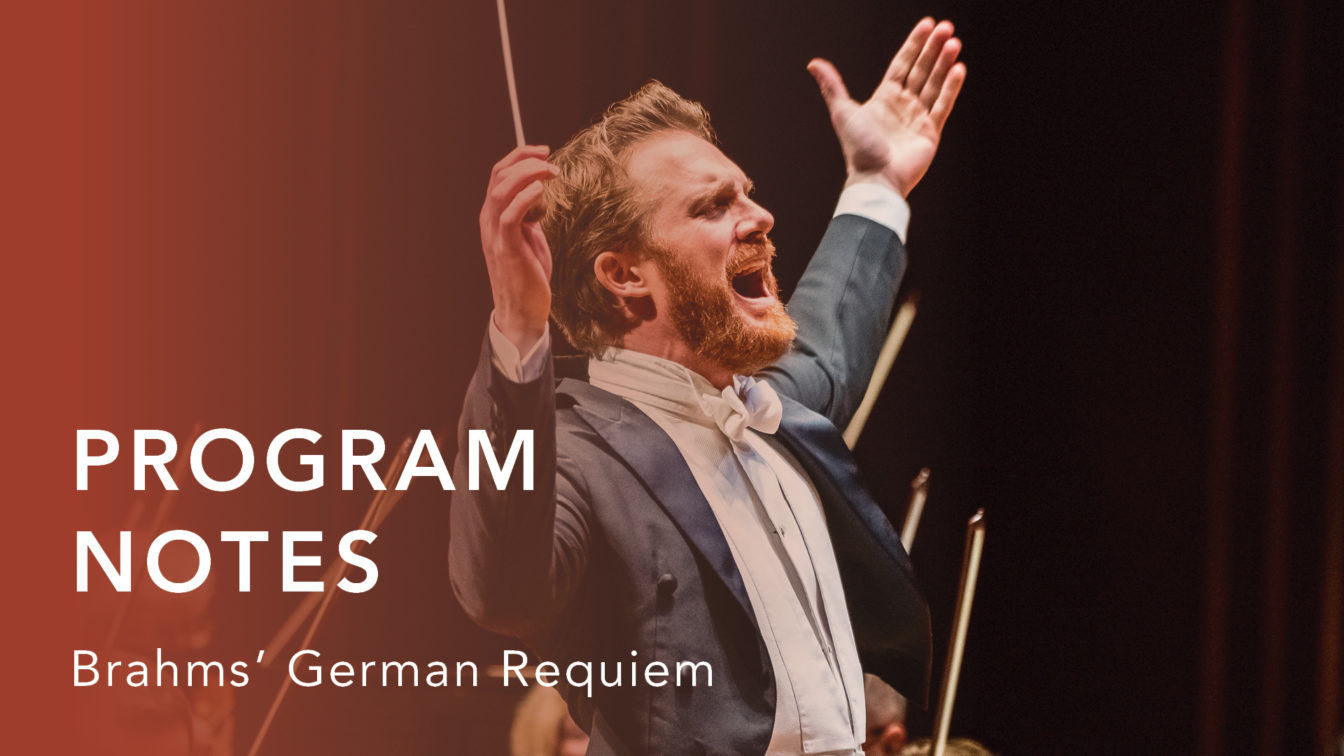 Gustav Mahler’s Songs of a Wayfarer

Songs of a Wayfarer is regarded as Mahler’s first masterpiece. He composed the cycle in the mid-1880s when he was romantically involved with the singer Johanna Richter. Eventually, she decided to pursue another relationship. In a letter to a friend, he described the work and said, “the idea of the songs as a whole is that of a wayfaring man who has been stricken by fate and now sets forth into the world travelling wherever his road may lead him.” The texts, which are Mahler’s own, deal with the plight of a lover who often thinks of the maiden he once loved. His original version was for voice and piano, but it is clear that he thought of these songs as orchestral. He re-used themes from the first and third pieces in his First Symphony.

Brahms’ A German Requiem is about giving comfort to those who are grieving. He combined his own selections from the Lutheran German Bible and chose passages that deliver a message of spiritual healing rather than one that was particularly religious. The score includes prominent roles for soprano and baritone soloists as well as the chorus. The orchestra’s role is also important, revealing the composer’s search for musical enlightenment at various levels. A German Requiem was a pivotal work in Brahms’ splendid career and is significant because it was his first triumph. He achieved great international success with it during the years following its first performance in Bremen, Germany, in April of 1868. It signaled a new maturity in Brahms’ compositions, setting an even higher standard that he continued to meet and exceed.

During the two decades before he met and married Alma Schindler, Mahler led one of the most turbulent love lives of any composer in the late 19th century. Because he was so successful as an opera conductor early in his career, biographical details are more readily available for Mahler than they are for many of his contemporaries. He was such a celebrity by the 1890s that people who interacted with him were already retaining memorabilia.

That is the reason we have so much information about Johanna Richter, a singer with whom Mahler became romantically involved in 1884 while he was working in Kassel, Germany. Ultimately, she left him, but he remained enthralled for quite some time and poured his passion into music. In a letter to his friend Fritz Löhr, he wrote:

I have written a cycle of songs, six of them so far, all dedicated to her. She does not know them. What can they tell her but what she knows…The idea of the songs as a whole is that of a wayfaring man who has been stricken by fate and now sets forth into the world, travelling wherever his road may lead him.

Eventually, the set of six was pared to four, becoming the cycle we know as Lieder eines fahrenden Gesellen, or Songs of a Wayfarer. Generally considered to be Mahler’s first masterpiece, the cycle is the earliest of his compositions to gain a permanent place in classical repertoire. Songs of a Wayfarer has been likened to Franz Schubert’s Die Schöne Müllerin and Winterreise, as well as to Ralph Vaughan Williams’ Songs of Travel (which was preceded by more than a decade ).

Mahler’s original score was for voice and piano, but it is clear that he thought of these songs as orchestral from the beginning. He wrote them in the 1880s, long before he had developed into a symphonist. Significantly, the orchestration dates from sometime in the 1890s (there is some discrepancy among various editions and manuscripts) but almost certainly after Mahler had penned both of his first two symphonies. By then, he had achieved a considerable command of instrumentation technique. Those who know the First Symphony will immediately recognize the second and fourth songs in this cycle because their music corresponds to the first and third movements of that Symphony, respectively. In fact, the entire plan of the First Symphony is closely related to these songs.

The texts are Mahler’s own, although they bear the clear imprint of the German folk poetry known as Des Knaben Wunderhorn (The Youth’s Magic Horn). While the tunes Mahler uses are relatively simple, his music is highly sophisticated and complex. The scoring is chamber-like, emphasizing the intimacy of the singer’s thoughts, despite the large orchestra. Further, each song ends in a different key from the one in which it began. Such a plan, which Deryck Cooke calls “progressive tonality,” was quite daring in the 1880s. It is but one way in which Mahler demonstrates in this early cycle so many of the distinctive characteristics that so brilliantly mark his mature compositions.

The origins of Brahms’ Requiem extend back as far as 1854. Most of his early orchestral music eventually found its way into the monumental Piano Concerto No.1 in D minor, Op. 15 (1854-59). One movement, however, was initially rejected: a slow scherzo in Sarabande rhythm. More than a decade later, he retrieved this lost movement, incorporating it as the second section of his Requiem, with the text “Denn alles Fleisch,  es ist wie Gras” which translates to “For all flesh, it is as grass.” Noble and powerful as this movement is, one can hardly believe that its inspiration came to a young man only in his early 20s.

In the context of Brahms’ compositional output, A German Requiem is significant because it was his first triumph. He achieved great international success with it during the years following its first performance in Bremen in April of 1868. It is considered to be the work with which Brahms came of age to full maturity as a composer. Clara Schumann attended the premiere, which Brahms conducted. She recorded the event in her diary.

As I saw Johannes standing there, baton in hand, I could not help thinking of my dear Robert’s prophecy, “Let him but once grasp the magic wand and work with orchestra and choirs,” which is fulfilled today. The baton was really a magic wand, and its spell was upon all present, even upon his bitterest enemies. It was a joy such as I have not felt for a long time. After the performance there was a supper in the Rathskeller at which everyone was jubilant−it was like a music festival. [Karl Martin] Reinthaler made a speech about Johannes that so moved me that (unfortunately) I burst into tears. I thought of Robert, and what joy it would have been to him if he could have lived to see it.

Following the Bremen performance, Brahms added the soprano solo “Ihr habt nun Traurigkeit” as the present fifth movement, bringing the work to the definitive form in which we hear it this weekend. The first complete performance took place in Leipzig, Germany, on February 18, 1869. A German Requiem was published later that year as Brahms’ Opus 45.

To the world at large, A German Requiem has even greater significance than it did to Clara Schumann because it takes such an unorthodox, original approach to the Requiem mass. In a traditional Requiem, the Latin text is directed toward the soul of the departed. It warns of the wrath of God for the Last Judgement. Brahms approached his Requiem in an altogether different manner. To begin with, he forewent the traditional Latin text in favor of Luther’s German Bible, choosing his text freely from both Old (Psalms and Isaiah) and New Testaments (St. Matthew, St. John, James, I Peter, Hebrews, Revelation and Corinthians). He also drew from the Apocrypha (Wisdom and Ecclesiasticus).

The Human and Humanist Element

In contrast to the customary Requiem text, Brahms’ text relies less on comfort from the concept of resurrection and more on faith in the human condition and the capacity for love. In a letter to Karl Martin Reinthaler, the cathedral organist in Bremen, he wrote:

I confess that I would gladly omit even the word “German” and simply put “Human,” also with my full knowledge and will, I would dispense with places like St. John 3:16 (“For God so loved the world that he gave his only begotten son”). On the other hand, I have chosen one thing or another because I am a musician, because I needed it and because with my venerable authors I cannot delete or dispute anything, but I had better stop before I say too much.

Brahms’ faith, while profound, was based on a humanist outlook rather than a religious one. In short, his Requiem is consolation for the living. It is music that gives the bereaved the strength and comfort to carry on. One leaves a performance of this work with an overall feeling of hope, restored confidence and faith in the power of love.

A Decade of Work, and Then Some

From inception to completion, Brahms’ Requiem occupied him intermittently for more than a decade. He drafted the Sarabande-like movement in its present form between 1857 and 1859. For a while, he may have been thinking of composing a four-movement Cantata before setting that idea aside in favor of other projects. After his mother’s passing, he resumed work on the Requiem, expanding his conception along the way until it reached the seven movements we hear at these performances. It was, and remains, the longest score he composed.